Peanut immunotherapy is giving people with allergies a chance to build up a tolerance to a potential fatal peanut allergy. Peanut immunotherapy is a type of treatment that focuses on building up a tolerance to peanuts. The treatment starts with a tiny amount of peanut protein, and then gradually larger amounts, until a target dose is reached. Now this is not a cure for peanut allergies, but it is designed to reduce the frequency and severity of allergic reactions.

Oral immunotherapy isn’t a new idea, and was probably discovered much earlier than you would expect. “The first report of food oral immunotherapy (OIT) was published in the Lancet in 1908 by AT Schofield who successfully desensitized a 13 y-old boy who was anaphylactic to egg by administering gradually increasing amounts of egg, while otherwise avoiding egg completely. Despite this early success, literature on food OIT remained scarce for most of the 20th century, until it was “rediscovered” in the 1980s with the beginning of the food allergy epidemics”(ncbi.nlm.nih.gov). Peanut specific immunotherapy though is a newer concept and practice that is a much more recent discovery. According to medpagetoday.com, “The peanut-powder oral treatment Palforzia became the first FDA-approved immunotherapy for food allergy in late January 2020. The peanut (Arachis Hypogaea) allergen powder-dnfp is designed to desensitize peanut allergies in children and adolescents, and prevent potentially life-threatening reactions.” Just a few months after the approval came the shut down of most of the United States due to the covid pandemic which threw off the uptake of this treatment. Edwin Kim, MD, director of the University of North Carolina Food Allergy Initiative in Chapel Hill says, “COVID-19 shined a spotlight on the downsides of a treatment that requires so many physician visits. Even though it is not an easy treatment, a lot of allergists are confident that there will be a wide acceptance of the treatment as the pandemic hopefully continues to get closer to the end.

Peanut immunotherapy has made a huge impact on individual lives, helping them build a tolerance to peanuts which could potentially be life saving, but also in how we go about treating allergies and options for people who have them. The adoption of this treatment by the people was very slow, not only due to the coronavirus, but also because of the high treatment burden. The goal of (OIT) is to raise the threshold that triggers an allergic reaction and train the patient’s immune system so that they will no longer experience a severe reaction to the allergen, including anaphylaxis, if they are accidentally exposed. In a way desensitizing the individual from their allergen. In the case of peanuts, “Studies have shown that approximately 60-80% of peanut OIT patients were able to safely consume greatly increased doses of peanuts after their course of treatment when compared to placebo patients”(allergycleveland.com). I personally have considered doing this OIT a couple years ago to try and help lessen the severity of my own peanut allergy. After multiple sit down conversations with my parents and my allergist it was decided that there was too big of a risk to attempt to try something that was so new with not a lot of knowledge and facts behind. 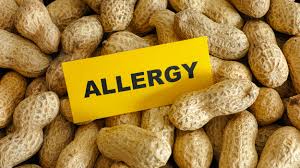 People’s views on peanut immunotherapy are very positive now that the pandemic has slowed down. Even locally we can see some examples of this. Allergy Associates of Western Michigan have been helping people for years. Jenin Shamali, whose son gets treatment at AAWM had something to share about her experiences with them saying, “My son completed peanut immunotherapy just over a year ago now and I can not even begin to describe what a blessing it has been to our lives. Dr. Miller and the entire AAWM team are truly amazing!” The hardest part of this treatment is actually deciding to continue with it. Stephanie Polk knows this experience all too well. Her daughter Olivia has a severe peanut allergy and she is worried about her daughter accidentally getting exposed in a new environment. She tells us, “I have some anxiety about exposing Olivia to her food allergen. We’ll wait to see how the school handles it and talk with teachers and the school nurse about the level of risk.”

Overall, the adoption of peanut immunotherapy is growing widely and posting very impressive results. Individuals can help out by supporting a person you may know who is going through peanut immunotherapy because it is a very demanding treatment with a lot of visits; also because it can be very nerve racking exposing yourself to an allergen. Otherwise just spreading awareness about the topic because there may be individuals out in the community who have allergies and are unaware of immunotherapy, specifically for peanuts. If a person does have food allergies, I strongly encourage them to reach out to their allergist or physician to seek more knowledge on this topic. Not only can it help lower the severity of an allergen, but ultimately it could end up saving your life.