There’s always something “unprecedented” going on in our times, and one consequence tends to be gas prices. Everyone who has driven a car or even been in the passenger seat of a car knows the agonizing resentment of that glowing symbol that periodically turns on in the corner of the dasher, and that agony has been enhanced since gas prices skyrocketed at the beginning of 2022, but why?

The answer is the economic law of supply and demand. Supply and demand is the idea that when there is a short supply of resources, the demand will increase, and it will be more expensive. When supply increases, the price will go down because it is less in demand. On estimate, we only have 47 years left of oil making it a big topic of debate within politics, specifically, diplomacy or how we interact with other countries. Because we don’t want to deplete gas at a high rate in our own country, we seek the aid of other countries to trade with us, one of our biggest trade partners being Russia. With the war between Russia and Ukraine, we backed out of trading barrels of oil, making it sparser, hence increasing the price. 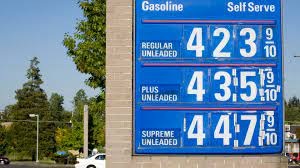 Gas prices have gone all the way up to $4.25 in the March of 2022, and according to native Ukrainian, Angelica Clark, “it’s justifiable because of the war in Ukraine. We put sanctions on Russia so we already predicted we would be negatively hit by it”. The sanctions, or a type of penalty that cut their funding, directly came out of the American government disagreeing with Russia’s advancement of war, and by doing that, it also stopped the trading of oil barrels to all countries that placed sanctions on Russia. “Everything has consequences, and this war caused us to all come to this decision together, not just in America, but in Europe and Ukraine,” states Clark.

It’s not a great time for gas prices anywhere that puts sanctions on Russia, which creates the political discourse that is seen in the media and even in our daily lives. “We’re saying in Ukraine that yes we’re in pain because of these gas prices, but we’re saying that we’d better pay with money than with lives. The lives of MY country,” Clark says in anguish. It’s tragic whenever there is a war, educating ourselves on worldly situations and maintaining an understanding community that wants to help is all that it takes to help in solidarity with those personally affected by it, even if it means paying a couple more dollars for gas.