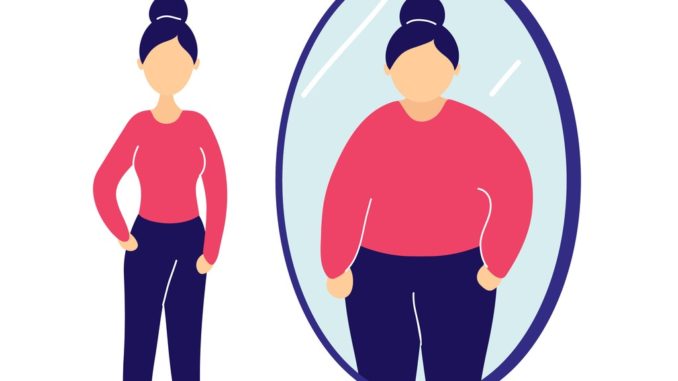 There are many topics that can lead to certain mental health conditions, and one of those topics is body image. Body image is how someone views their body; how comfortable they feel about it; how they judge themselves; and how they view their appearances. A negative view on body image can lead to specific mental health conditions, such as depression and eating disorders. Body image is not always related to how a person feels about their size, weight, and how much they eat, but can also relate to how a person behaves as a result of their thoughts and emotions, resulting in a positive or negative image of themselves. Through Instagram, Snapchat, T.V, and other forms of media, there is a toxic idea that a woman should have specific traits, such as a slim, curvy body; large breasts and bottom; makeup on their faces; and not too overweight, but not underweight either. The same goes for boys, with the toxic idea that a man should be tall, slim, athletic, and should not show his emotions. These ideas can cause a negative impact on how one views themselves.

According to the U.S Department of Health & Human Services, women tend to be so focused on their body image because all through their childhood and adulthood, they see messages in the Media about how they look, or how they should look. Although many pictures of the young, thin, attractive girls seen in these forms of media are edited using computer technology, women tend to try to meet those standards, which ultimately do not exist. “Girls are more likely than boys to have a negative body image. This may be because many women in the United States feel pressured to measure up to strict and unrealistic social and cultural beauty ideals, which can lead to a negative body image”(womenshealth.gov). Through research, it is shown that all women – young and old – with negative thoughts about their body are more likely to experience health conditions, such as eating disorders and/or depression. The individual’s who research this topic suspect that more women seem to experience depression more than men due to their negative perception on how their body looks and feeling uncomfortable with their height, weight, and other aspects of their looks.

Centerstone, a behavioral health and addiction service organization, explains that for years the diet industry has been collecting $70 Billion dollars every year, while the beauty industry can make $100 billion dollars each year. How do they do this? They point out the height and weight of women everywhere, and suggest that they use their products to make them more pretty and desirable. Centerstone, on the other hand, suggests avoiding conversations about appearances and to change the subject whenever the topic pops up. They also suggest that cleaning out the newsfeed on one’s phone would help as well. The media contains many articles and pictures that can cause a negative effect on how girls and women view themselves. It is best to unsubscribe from these websites, and follow websites that encourage self-love no matter how someone looks. “Having a better relationship with your body doesn’t start with losing weight or changing your appearance – it begins on the inside. It’s about your willingness to question what’s being presented to you”(centerstone.org).

It’s good when someone catches themselves experiencing poor body image. But how do they do that? Thoughts and emotions are connected with a poor body image, and that’s why it’s important to be gentle with these thoughts and not let them control how someone views their body. A popular sign of negative body image is reassurance. Maybe an individual will wear an outfit and say, “Do I look fat in this?” or they will constantly groom themselves and/or repetitively look at themselves in the mirror. These are major signs of a poor perception of one’s body. There are many other ways that poor body image can take over. Someone might compare themselves to other people and think that they aren’t as good looking as that person, or they become afraid that other people will notice a physical trait that they don’t like about themselves and so they hide it in any way they can. These are just some examples of an individual who has a poor view of themselves. Thoughts and emotions can be very powerful, especially when it comes to self-esteem. It’s very important to look at the positive aspects of the body, and contemplate all the good things it does. “…people tend to forget about the body’s important utility, and it does so much for us, too–our body’s get us from point A to point B…to put body image back in perspective, experts suggest that you curb the use of social media…”(psychologytoday.com).

Body image is a very serious issue in our society. It is unreasonable that a person is defined by their appearance rather than their actions, and it is actually unfair that a slim girl gets more attention than a girl who has a few more pounds on her. That’s simply not how it should be. While Social Media is a good place to share ideas, experiences, and friendships, it can also be a very judgmental place that can affect one’s way of thinking and how they choose to view themselves. Everyone wishes that their body was like that other person’s body, but if everyone had the same appearance, what good would that do? It would only support the condemnation of people who are different. That’s why it is important to self-reflect on a daily basis to help gain a positive view of one’s appearance, and help others gain a positive body image as well.

If there is more information that the reader would like to know about obtaining a healthy body image, it might be good to start with these reliable resources on mental health.