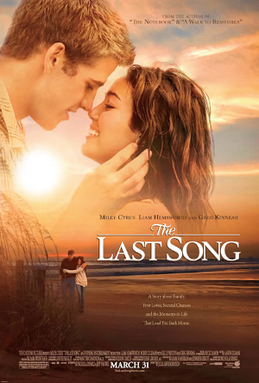 Everyone’s heard of Nicholas Sparks, at least I hope you have. The award winning author of all things love. His books find a way to impact everyone in all different ways while focusing on the topic of love. Well his books are almost always made into movies. Most recently I watched the movie The Last Song directed by Jullie Anne Robinson, based off of the Nickolas Sparks book. It’s a romantic drama that is probably watched by more young women than men.

Julie Anne Robinson is a British film director that has directed various different shows and movies. She directed a few episodes of the Bridgerton series on Netflix which was a trending show in the U.S for a while. The Last Song is available on almost all video streaming platforms. It Isn’t based off of a true story all though it very well could be. Miley Cyrus who is a very well known actress and singer, is one of the main characters along with Liam Hemsworth.

I loved the plot to this movie and how it incorporated love and family into the theme. I think Miley Cyrus is a really good actress in this movie and she played her character very well, but some have said they felt she was ¨unromantic.” In this movie she plays a young girl who has a distressed relationship with her dad who is actually suffering with cancer but she doesn’t find that out until later in the movie. She is the center of all the love connections, whether it’s with her brother, her new boyfriend, or her dad. I also think this movie follows a good story line. This movie was filmed well, it had a lot of different types of scenes and the scenery around the shots always fit the mood. Although I’m a sucker for a good love story, I truly think that this movie was written in a way that was realistic enough that it could relate to most of the viewers watching it.

Although, out of all the movies based on Nicholas Sparks books, this is one of my least favorites. I think throughout the whole movie the main ideas between a relationship of two teenagers and a relationship between a father and a child, is juggled around a lot. The movie could have been a lot better if it focused on one idea and strengthened it.

Overall, The Last Song is an ageless film, and I recommend it to anyone wanting to watch a good love story. It may not be my favorite romantic movie, but it is still a movie well worth watching. Rope your significant other into watching it and maybe he or she will learn something from the main character’s love story. Lastly I want to leave you with a quote from the movie that I think sums up the theme of love, ¨ Love is fragile. And we’re not always its best caretakers. We just muddle through and do the best we can. And hope this fragile thing survives against all odds.¨