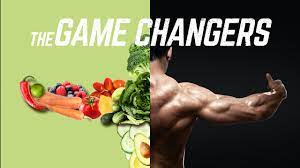 If you are lacking energy lately, looking to gain muscle, and trying to eat healthier, the documentary “The Game Changers” might be a good show for you to watch. The Game Changers is a documentary that encourages average people, athletes, and others to go plant based and stop eating meat for better health. This documentary uses a lot of different athletes who all play different sports to support their evidence that going plant based can make you faster, stronger, and have more energy.

The whole documentary started when James Wilks, a guy who taught self- defense skills to the military, got injured very badly in a fight and was not able to go out or do anything. While he was on the coach he started to look up ways to recover faster so he could get back to fighting, that was when the idea of plant- based eating came up and he did the research on it to see if it was valid. The documentary takes viewers through some of the athlete’s lives, shows how much training they do and all they eat to make them better athletes.

In my opinion, this documentary did a good job of grabbing my attention right at the start, it was interesting to me because it was introducing all kinds of people from different places who all live different lives but are all working towards the same goal of getting better. The middle of this documentary lost me a little bit at times because it talked about the science behind the whole plant- based eating diet and I am not a science person so I don’t find those parts very interesting, but it was still very good and informative. The ending of the documentary did a great job bringing all of the information and people together to show what the end result was when these people are on the plant- based diet. Going into watching this documentary I didn’t have many expectations, but the ones I did have the documentary fulfilled and exceeded. The ending of the documentary was very satisfying because it showed all the people in the beginning who were excited to reach a goal, reaching that goal and more. I didn’t really think the documentary had a message to it, I think that it had good information and suggestions, but I don’t think that it had an overall message, it was just informative.

This documentary was so good, but there were a few downsides to it in my opinion. Although the documentary was super informative, some of the scientific explanations were too long and I got bored and zoned out a few times. I also think they should have used some everyday kinds of people because they only used athletes who are training to be the best of the best or in the olympics.

Overall this documentary was very interesting and informative. At times it was a little bit boring, but it was cool to watch these pro athletes get stronger and meet their goals. I would recommend this documentary to people who are interested in eating healthier, getting stronger, and having more energy in everyday life.