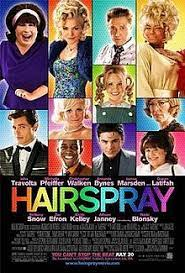 In the 1960’s, it was a very tumultuous time with the advent of the Civil Rights movement, which was brought to the forefront of society by Dr. Martin Luther King, Jr. the lack of equality for people of color in the community created an intense environment for everyone. The Hairspray movie brings this movement to light with the sad truth of what was happening and a light heartedness with fun, yet powerful music to keep the audience entertained. The movie is aimed towards all types of audiences and ages because it is made in such an understandable way as a musical and shows the significance of the division between black and white. “Things need to change and I won’t stop tryin’ to change them,” says the main character Tracy Turnblad, a white teenager who strongly disagrees with the status quo of the time.

The movie Hairspray was set during the times of segregation in the inner city of Baltimore Maryland. The original movie came out in 1988 and was based on the true events that happened in the 60’s on The Buddy Deane Show. Following that, it was on Broadway and was very successful for six years. Due to the success of the Broadway play, they brought the 1988 film back to life in the 2002 version that can be found on multiple current streaming platforms such as Netflix. In the Hairspray script the representation of what was going on in The Buddy Deane Show, was called, The Corny Collins Show. Tracy was asked when trying out for The Corny Collins show, “Would you swim in an integrated pool?” She responded with “I’m all for integration, it’s the new frontier!” Meaning that the message behind the movie is that differences can’t separate you, only bring you together and the color of your skin should not dictate your position in society as everyone is equal.

Everyone should watch this movie because it is uplifting, heartwarming, and it talks about the issues that are still present in today’s society in a light and airy way that can be understood by many. Due to the well written songs and fun choreography the movie keeps viewers engaged and interested in learning more about the struggles of the black community. I think that this movie is very entertaining for all and can be re-watched over and over without getting tired of it.

Even though this movie is quite humorous and entertaining, the subject of the matter is very serious. It could make some people uncomfortable with the way they present the movie itself. Miss Motormouth Maybelle, who is played by Queen Latifa states, “Boy, If we get anymore white people in here, this is gonna be a suburb.” This quote, like many others from the movie, shows that it could offend some people who are sensitive to the subject matter. They also talk about body image which could provoke or embarrass some people.

This is by far my favorite movie because it leaves viewers with the impression that things will get better. It always brings me so much joy when I watch it and can make me laugh when it is much needed. One of my favorite quotes from this movie is when Wilbur Turnblad says, “This is America, babe. You gotta think big to be big!” and Edna Turnblad replies with, “Big ain’t the problem in this family, Wilbur.” This is just a perfect description of the movie itself on how it’s talking about first world problems, but in a cheesy way.