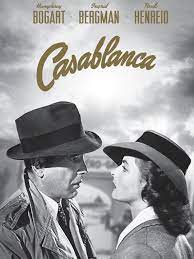 I challenge you to watch Casablanca, a world known classic. It is about a man named Rick who  owns a nightclub. It was a normal night for him until his old lover from Paris walks into his nightclub with her husband who has Germans after him. Rick chose to help his old lover get out of the country with her husband rather than being selfish. This is a good story to educate younger people to see what really happened back then and the sacrifices people had to make.

The film Casablanca was released in January of 1943 and is based on a true story. It presents how in real life at that time refugees were hiding and trying to escape from the Germans. Michael Curtiz was the director of this film. Michael Curtiz was Hungarian born but was an American film director. He was a very proficient and respected movie director who is known for many classic films.

This was a very good film to watch especially since it’s in black and white. Casablanca had a good yet confusing plot. I enjoyed this movie because while watching it I could realize all of the foreshadowing and symbolism that was used.It mainly focuses on how he sacrificed his love for Isla so that she could be happy. Casablanca is a type of movie that you have to actually pay attention to or you will be lost. I recommend this movie if you want to try something new that is an older movie, or if you are into history this is a good movie to watch.

Casablanca could be better by maybe making the plot a little easier to follow for those who struggle with that. It is confusing at times but in the end it all made sense. Also bringing up the names of characters more would help because some of the characters’ names were hard to follow.

The big catch to this movie was when he chose to help Isla’s husband escape instead of being able to be with her and love her. If you are really interested in a movie like this and older movies I would recommend trying some of Michael Curtiz’s movies as well.