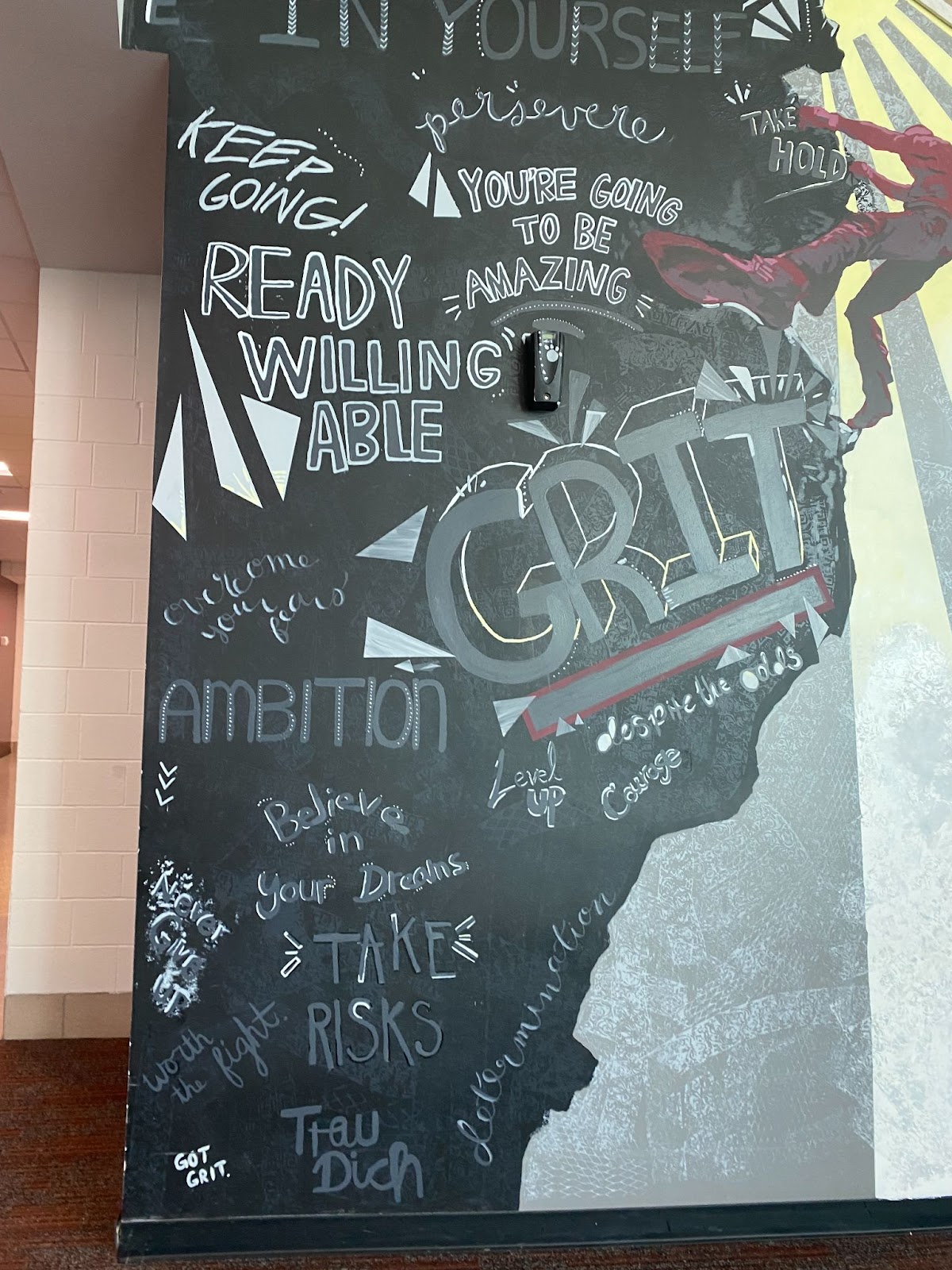 Students around Grandville High School can’t pass a corner without seeing posters or murals about the saying, GRIT! GRIT is an acronym for growth, responsibility, integrity, and togetherness that the Grandville highschool staff hopes to see in their students daily. The mural in the athletic entrance of the high school uses a rock climbing effect to remind students to set goals and work past the barriers set in their way.

Grandville’s previous assistant principal, Mr. Philo encouraged the AP art students to create a never ending reminder that anyone can work past the roadblocks in their way if they take it one step at a time. During the students’ free time in the spring of 2018 they went to the athletic entrance to paint this mural. “The students were given free reign to incorporate their artistic capabilities in whatever way they wanted to” as Mr. Johnson says. The GHS athletic entrance is open to the public so Mr. Philo wanted not only the students to feel inspired by this mural but the town of Grandville as well.

“Rock climbers are calculated risk takers who often have a plan for their course of action but need to adjust regularly as they climb” Mr. Philo vocalized. In January of 2014 Grandville’s principal was diagnosed with an aggressive form of Leukemia. He continued fighting the disease into 2018 when this mural was painted. Mr. Philo says “Mr. Vanderslice was a “rock climber” in how he battled his disease and continued to support the community.” Mr. Vanderslice actively demonstrated what GRIT stood for during his illness, and continued to face the challenges in his way with a smile on his face. Passionately showing the true meaning of having GRIT. It was no longer Grandville’s goal for students to climb a ladder to success but for students to climb a rock wall meaning to become adaptable and focused to the environment around them.

The Grandville High School students thought this was just a mural about GRIT. as Jillian Baar and Ella Conely said, which is a common misconception. Mr Johnson also hopes to have more colors added to it. He thought of this wall to be bold and bright and more of a statement but he still likes how it turned out. On the other hand Grace Elders thinks that the mural makes it “more Grandville looking,” the word Grandville signifying GRIT and moving forward despite obstacles set in the students’ way.

The main concept of this piece is for readers to understand the true meaning of GRIT and why it should be used in not only Grandville’s day to day lives but everyone’s daily lives. Instead of freezing in the path of barriers, Grandville hopes for students to adjust and continue climbing the rock wall to success.