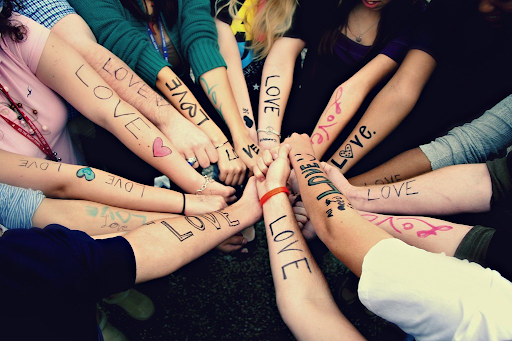 “We are only asked to love, to offer hope to the many hopeless. We don’t get to choose all the endings, but we are asked to play the rescuers. We won’t solve all mysteries and our hearts will certainly break in such a vulnerable life, but it is the best way. We were made to be lovers bold in broken places, putting ourselves out again and again until we’re called home”(To Write Love On Her Arms). Suicide, depression, and addiction are at their all-time high and people who are struggling would not reach out to the help they need, but with the help of To Write Love On Her Arms, we hope that people will at least reach out to a bridge to help. TWLOHA is a bridge to help with addiction, suicide, self-injury, and depression.

In 2006, founder Jamie Tworkoski helped a friend named Renee who struggled with self-injury, addiction, and suicide get into treatment. After she entered treatment, he wrote a story about Renee and how he and his friends cared for her in the days she most needed it. The story describes how he attempted “ To Write Love on Her Arms” instead of pain. According to TWLOHA on the learn page the way To write love on her arms became a non-profit organization because “He wrote about the five days he spent with her before she entered a treatment center, and he sold T-shirts to help cover the cost. When she entered treatment, he posted the story on MySpace to give it a home. The name of the story was ‘To Write Love on Her Arms’”.There is a huge need for organizations like To Write Love On Her Arms because according to Befrienders Worldwide in the last 45 years suicide rates have increased by 60% worldwide. Suicide is now among the three leading causes of death among those aged 15-44 (male and female). Suicide attempts are up to 20 times more frequent than completed suicides. According to the National Survey on Drug Use and Health, 19.7 million American adults (aged 12 and older) battled a substance use disorder in 2017. Lastly according to depression and bipolar support alliance major depressive disorder affects approximately 17.3 million American adults, or about 7.1% of the U.S. population age 18 and older, in a given year.

As a presence both online and in-person at festivals and events, it can be difficult to measure exactly how many people they have interacted with. However, they have sent over 210,000 messages to people in more than 100 countries, traveled to more than 3.8 million miles to meet people where they are, have 1.5 million likes on Facebook, and more than 220,000 Instagram followers. They have also donated 2.4 million dollars to treatment and recovery and helped more than 56,000 people search for resources in their areas. Joel Leon states, “I think the first time I learned I wanted to die was when I was five, and holding the tip of the knife to my belly to quell a hunger that felt like a broken record. Sometimes I thought I could fly if I tried hard enough. Back then I felt like a broken record, like the skkkkr before the needle that requires a penny to bear the weight. That was me, both needle and record spinning, spinning looking for something sharp and edgy to find faults in early on.” He, later on, he goes to say that TWLOHA saved his life and got him help.

Mrs.Koza the Mental Health Coordinator at Grandville High School knows about To Write Love On Her Arms and thinks that they are a great organization. “One relatively common misconception about To Write Love on Her Arms is that they are a band. Since they have been heavily involved in the music scene, sometimes at events people will approach our booth and ask when our set is.” Another misconception is that they are mental health professionals. They are not trained professionals nor are we a treatment center. They seek to serve as a bridge between those struggling and professional help. They also seek to break down the stigmas around mental health and let people know that these topics are fair game for conversation.