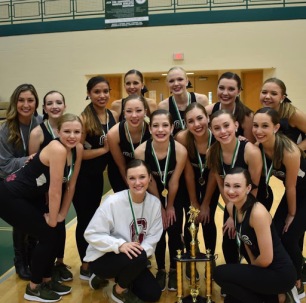 You may have seen this energetic dance team in the guy-girl dance at the homecoming assembly this fall. These girls don’t only dance for the assembly’s and basketball games, they also compete against other local dance teams. The dance team won their first competition of the year at Coopersville High School on December 1st in both pom and hip-hop categories. It takes countless hours of hard work and dedication to get there.

Anna Gelfius, a senior on the team, says that it can be pretty stressful at some points. “We usually finish our dance the day before competition or make changes the day before, so it’s hard to remember everything,” Gelfius reports. They put in hours of work behind the scenes of their lively performance, it is typically around “an hour and a half, two or three times a week,” junior Abby Hunt says.

The team with their first place trophy from the Coopersville competition.

This team of girls have been dancing together for years. Most of them also dance at Kathy’s Dance Company for the competitive dance team as well. “My favorite part about being on the team is how everyone is super close and supportive of each other,” freshman Carlee Cawthon mentions.

As the team continues on with their competitive season, senior Carter Gray hopes that they will “become a family that finds ways to celebrate each other whether it be when we are exhausted at practice or after a victory at a competition.” This team shows off both a hip-hop and a pom routine. Be sure to come out to a competition this winter or watch their halftime performance at the varsity basketball games. You won’t want to miss it!