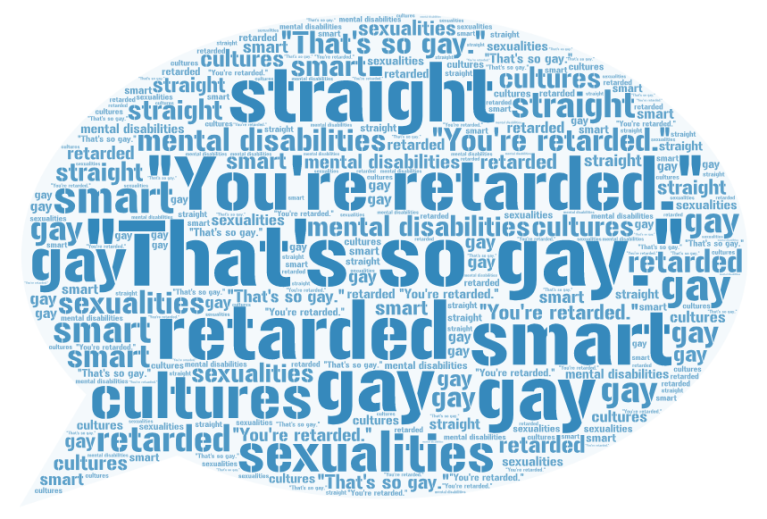 Think about what people hear in the halls, in the mall or walking around downtown. How many times do you hear someone say “man, that’s gay” or “that’s so retarded” and other similar things? Sure, we may not think anything of it because this type of language is heard all over the place, but do people realize how harmful speaking like this actually is? Using different cultures, sexualities, or mental disabilities in a derogatory way is not okay, and we need to work on changing how often we use these sayings.

Let’s start with the topic of using the word retarded. This word comes from the name of a mental disability and has previously been used in medical contexts. The reason it’s so harmful to use this word in a derogatory way is because it seems like a slash at people with mental disabilities. By using this word to attack friends or situations that people believe are stupid, they are taking something that is serious and forming it into casual conversation. Emily Shooltz, a senior at GHS, says “I use it but I know it’s not right.” It needs to be brought to more people’s attention how the use of this word is wrong so the word doesn’t keep coming up in conversation. We don’t refer to mentally disabled people as retarded anymore but according to Mark Peters from The Boston Globe, “Any variation of ‘retard’ still carries a toxic feel for many.”

Another type of language that needs to be changed is when sexualities are used as insults.  D’Arcy Lyness from Kidshealth writes “when (people) don’t like something or think something is weird, or they want to make fun of someone, they might say, ‘That’s gay’ or ‘You’re so gay’.” It’s not okay to take slashes like these based on how you perceive a certain type of sexuality. Not only is it unnecessary to use ‘gay’ as an insult, but the word originally correlated with happiness, so when did this turn into an insult? Thinking of it literally, why would someone say “You’re so happy” in order to insult someone? Alexa Funk, a junior at GHS, thinks the same way saying  “It’s the same as saying ‘oh that’s so straight’ like that’s weird so why say it.” It just doesn’t make sense, which is another reason why it needs to stop.

One of the most controversial words that’s used pretty often is the n-word. There’s so many questions circulating around the use of this word. Why can black people use it and not white people? Is it really that offensive if it’s in media all over the place? When white people use this word they’re seen as racist in some cases, but is the fact that only black people can use it without repercussions considered a form of racism? Michael Harriot of The Root has the same thought and writes “Some argue that if black people can say it but white people can’t, then that’s the definition of racism. Some argue that we can’t use the word in music, sell it to white people and then get mad when Alabama sorority girls use it…” Some black people may think that having the “privilege” to use this word makes them feel empowered and makes them feel connected to other black people, but if they get offended when white people around them use it, then why should they be able to? In order to solve this problem, the word should just be avoided all together, that way no one can get offended.

There are so many different phrases and words that cause issues because they are used as insults, but these are the few that really stick out. Whether it’s a light hearted joke or a phrase used to attack someone, using these words should be avoided at all costs. If people avoid this type of language, not so many people would get offended and there wouldn’t be so many controversial situations.