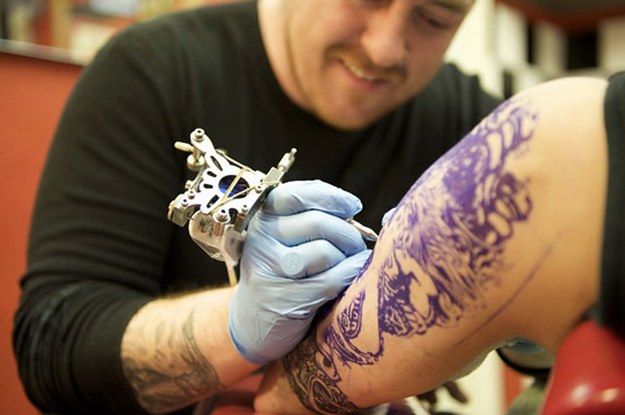 “I can’t believe you got a tattoo already. You are 16! I didn’t get my first tattoo until I was 18!” My aunt stated one night after finding out I had gotten a tattoo. Which was interesting to hear that she was so shocked. When she was younger, tattoos at a younger age weren’t normal. They were almost looked down upon. They gave people the image that anyone who was younger and had a tattoo were “rebellious” or immature. When nowadays it’s the normal to get a tattoo at a younger age.  “I’ve worked as a teacher at Grandville for a while now, and not even 5 years ago I would have someone come in maybe every couple of months asking if I wanted to see their new tattoo. Now it seems like every 2 weeks I have a student coming in asking if I’d like to see their tatto! It’s crazy,” Mrs. Peterson stated. Is it really that bad to get a tattoo at a young age? And why do people think so poorly of tattoos?

Hannah first got her first tattoo at 16 and said that she had absolutely no regrets with it and that it means a lot to her. One of the main questions I wanted to ask her was if she thought she was looked down upon, or considered a “bad kid” when people found out she had tattoos. When I asked, she replied with “My tattoos are hidden so people don’t know I have them when they first meet me. But after they found out I had tattoos, I’ve had people look at me differently as well as treat me differently when they found out I had a tattoo.” That isn’t gonna stop her though, from getting more in the future as she’d like to.

I also talked to Mrs. Ward earlier this year about her tattoos, and her opinion on tattoos. She talked about how she had 4, but now currently has only 3. She got her first tattoo when she was 19, and said it was “A BIG mistake.” She ended up getting the tattoo covered up when she turned 35 and said there was absolutely no significance in the tattoo. Then her friend wanted one and convinced her to get one as well. She currently has three tattoos and would for sure go for more in the future. Mrs. Ward commented that she felt like she was looked down upon by people when she got her tattoos. “When I first got my tattoo I was just starting to student teach and I for sure felt like I would be looked down upon, because they told kept telling me I HAD to have my tattoos covered up. Since I started teaching, the stigma for needing to keep the tattoos covered and/or the criteria for having them has gone way down.” I also asked about her opinion on students having them and if she looked down on them, in which she applied, “No! Not at all. I do tease them a little if they talk about getting one but, No, I do not think it makes them a bad person or any of that.”

So what is actually so bad about tattoos? Mr. Herbert claimed “When I was growing up the only people who had tattoos were the people in gangs, like biker gangs, etc. and people who were in prison or just coming out of prison. I don’t mind smaller tattoos, but it’s when people get tattooed all over their face or neck, when I think is that really necessary?” He went on to say “The more I think about it, I do think I look down on them a little bit. I know some people who have smaller and discreet tattoos, and I don’t mind that necessarily, but all around I’m not a fan of tattoos.”