The famous “Baby” singer, Justin Bieber, was spotted downtown Grand Rapids the weekend of September 9th, for the Christian music festival, CityFest. He was backstage at the event with his future father-in-law Stephen Baldwin.

The press and fans were buzzing all day trying to figure out why the celebrity was coming to town for the festival. All of the local news stations came to Ah Nab Awen Park, where CityFest was being held, to try to get an interview with Bieber or anyone else who was willing to give them information. Many different articles popped up throughout the day. “Organizers of CityFest say that a friend of the Luis Palau Association invited the pop star as a guest to the event,” WZZM 13 comments.

Earlier in the day, Bieber, Baldwin, and another friend were spotted at many Grand Rapids classics such as Madcap Coffee and Little Bird Cafe. Bieber stopped to take pictures with a few fans after his brunch at Little Bird Cafe. Many fans saw him behind the fence at CityFest, but a few lucky students from Grandville High School got the chance to meet him, including myself.

“Justin was very nice,” junior Emma Kukla says. “I was very surprised about how short he was though.” I was with Kukla when we ran into him while he was visiting a friend just off of Monroe at The Morton Apartments. A older man who also lives in the apartment complex, mentioned that Bieber was hanging out in the penthouse. Kukla and I met and got to talk to him earlier in the day at the JW Marriot but finally got to take a picture with him later.

Bieber was kind enough to stop and take a group picture with the 20 fans or so that had gathered outside of The Morton waiting for him before he got in his car to go to the festival. He is known for loving younger kids and immediately took three year old Harper in the group picture. Bieber even kissed her on the cheek; what a lucky girl! 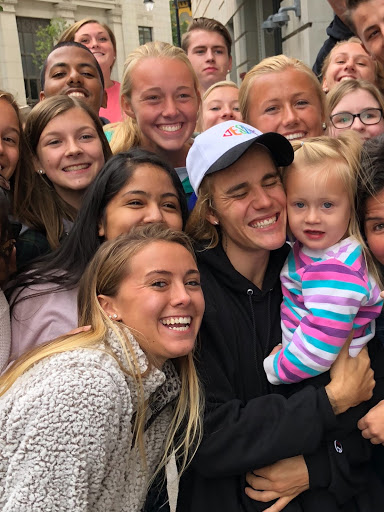 Grandville High School senior Ethan Fare even got his white Vans signed by the celebrity. He got Bieber to sign his shoes outside of his hotel room.

This was an action-packed weekend for Grand Rapids and something I never thought would happen. Who ever thought Bieber would be walking around downtown on a random weekend in September? I sure didn’t! Hopefully, we will see Bieber in Grand Rapids again soon.