In the Spring of 2017, an executive decision was made to remove a total of 12 trees–six from the front entrance and six from the back entrance–from Grandville High School. 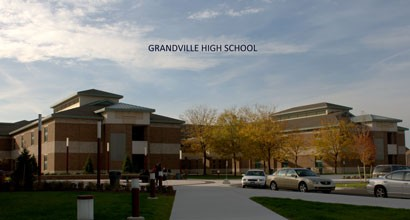 “The main reason [for the removal of the trees] was due to their height and how close they were planted to the school,” revealed John Philo, Grandville High School’s principal. “They were getting too big, some of the branches were even brushing against the school.”

Other reasons the trees needed to be removed include:

Valid reasoning or not, a collection of students were upset with this decision, some even displaying their resent by making videos and airing them on the school’s morning announcements.

“I remember there being multiple outros a week [on the morning announcements] for almost a month after the trees were cut down, it was crazy” recalled Sarah Orme, a sophomore at the time the trees were removed. “Seeing the videos got me triggered, like, was it really necessary to cut them down?”

“I love the environment, so when I walked into school one day and saw the trees being cut down, it really upset me,” Blitchok explained. “I really wanted to do something.”

When AP Environmental Science (APES) teacher, Christopher Groenhout, assigned an independent research project for the 2017-2018 school year, Miars and Blitchok knew exactly what they were going to do: use the project as an opportunity to rectify the feelings of unsettlement they experienced months prior.

The project–one that is assigned by Groenhout at the beginning of each academic year–was to solve an environmental problem and record data throughout the process. Blitchok and Miars’ ultimate goal for the project was to plant four trees in the back entrance of GHS.

“We thought four would be a good start. Personally, I just wanted to make the school look better,” Miars said. “Once they were cut down the school immediately looked worse and it made me sad. Honestly, the school kind of looked like a prison.”

Trees create an ecosystem to provide habitat and food for birds and other animals. They absorb carbon dioxide and potentially harmful gases–such as sulfur dioxide and carbon monoxide–from the air and release oxygen. In fact, one large tree can provide a day’s supply of oxygen to four people.

Lori Koza, a mental health coordinator and an advisor for the GHS Be Nice. club, contends the positive effects of trees on students’ mental health.

“I’ve done some research and found that planting trees is a great way for students to relieve stress,” Koza claimed. “They reduce blood pressure and the stress related hormones, cortisol and adrenaline.”

Blitchok and Miars proposed planting Kwanzan Cherry trees, an alluring type of tree which produces brilliantly colored orange, yellow or copper foliage in the fall, and a profusion of stunning, pink blossoms in the spring. 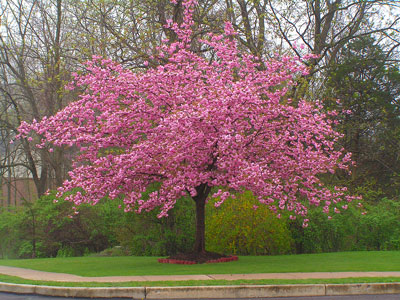 “They are absolutely stunning, which is why we picked them,” Miars explained. “They’d be great for students to take their senior pictures by, and to see the trees walking into school everyday would be amazing.”

In the end, Miars and Blitchok were unsuccessful with their project due to similar problems that resulted in the extermination of the original 12 trees.

“It really isn’t up to me, it’s up to the Grounds and Maintenance Crew and ultimately the School Board,” Philo said regarding the decision to decline the replacement of trees in the school entrances. “Sadly, any plant that is grown close to the school and of that size is going to be rejected.”

“I’m all for ‘greening’ the school,” Philo said. “Whether it be to plant flowers or bushes near the entrance, or planting trees farther away from the school building, like by the baseball field.”

As for the girls, their next step is to somehow make a difference before Miars graduates in 2019 and encourage others to leave their mark in the world.

“I just want to do something beneficial before I leave GHS,” Miars stated. “I’m sad we couldn’t plant trees in the entrances, but Jen and I are willing to plant some in other areas around the school–it would still be fun and great for the environment.”

“Everyone can help the environment” added Blitchok. “It starts with the little things, like planting trees. If everyone does a little, in the end it it will make a big difference.”

And as far as their grade goes, the girls still got an A on the project.