by Maddie Osterink and Amaya Berkley

“I can remember him trying to promote magazine sales and one of the prizes was a mini bike. He was so upset that the sales weren’t as good as he had hoped, so his idea was to ride the mini bike around the hallways at the middle school. He had put a spiky hat on and jumped on the bike. It was hilarious to see a 6 foot 6 guy ride a mini bike,” Grandville High School Principal Mr. Philo recalled.

This fun-spirited man was Mr. Vanderslice, or commonly known to students in the high school as “V-SLICE.” He always had a smile on his face and was always very competitive. Mr. Vanderslice, former principal of Grandville High School, recently passed away due to Acute Lymphoblastic Leukemia after a long well fought battle. He demonstrated the true definition of “Got Grit.”

Got Grit. The well-known phrase that is forever embedded in many Granville hearts. Got Grit is not just a phrase to these students though, it is a way of living. It means to push through the hard times and constantly work to not just strengthen yourself, but also others around you. Mr. Vanderslice always lived the mantra “GRIT.”

Several months ago Mr. Vanderslice was told he couldn’t be healed, but he was also told there’s another chance of chemotherapy that had a 10% chance of working. He knew it probably wouldn’t work but he couldn’t pass knowing he did not try everything he could. He was told other chemotherapy options were impossible for him before, and with his passion and grit, he made them possible.

When it comes to who he was as a person, you could just simply state it as a plethora of greatness. He was a man who loved Grandville and faith, and he believed in students as much as he believed in himself. The worst thing to him was seeing a student throw away all opportunities handed to them when he knew they could do great things in life. According to Mr, Philo, if Mr. Vanderslice had to prioritize his life it would be Faith, Family, and Grandville. He truly deeply cared for everyone and everything at Grandville. He also knew everyone would be great and do well as long as they put themselves to it.

“I already know you’re going to do great things in life so get to work.”

He believed so strongly in Grit and having a great time that he was an overall goofball and would always put a smile on everyone’s face. He smiled every day whether it was raining, snowing, or the sun was shining. Mr. Vanderslice always wanted to have fun, even at the most serious times, and he would always try to make a competition out of everything.

There was one time Mr. Vanderslice was at a baseball game with a few friends and someone ate 12 hot dogs. He felt he needed to win, so he ate 13. Competition was a big part of his life, everything he did he always found some way to make it competitive, which is why sports and clubs were so important to him. However, according to Mr. Philo, he felt that the school was divided and so were the sports teams.

“He always felt that the school wasn’t united. The sports teams rivaled against each other, and that he wanted to unify the community and the school as one large family,” Mr. Philo said.

After he was diagnosed in January of 2014, the whole community and school came together as one and really showed support for him and his family. His first fundraiser raised over $17,000, which was donated from just the community and Grandville schools. He really saw how close everyone grew together as a family and community.

Mr. Vanderslice made long-lasting memories for all teachers and he was particularly close with several of them.

Mrs. Beckett remembered the time when Mr. Vanderslice hired her to be an English teacher. She was really nervous, but he made it comfortable for her.

Mr. Klinger remembered the time when Mr. Vanderslice called him encouraging him to apply for the coaching position for basketball. He said he always hoped to grow closer to Mr. Vanderslice.

Mr. Vanderwall remembered that Mr. Vanderslice was “a genuine educator with passion” who is willing to go the extra mile for students and staff. 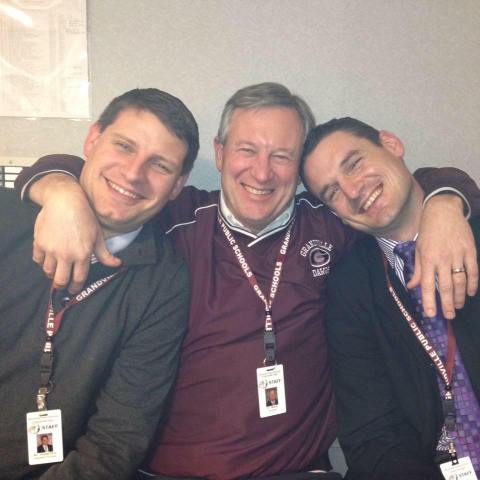 Mr. Philo remembers his last hours with Mr. Vanderslice. He knew that he was going to pass but Mr. Vanderslice said, “I will see you soon,” and laughed and smiled, wanting that one last smile with Mr. Philo.

Mr. Klinger feels he impacted the school with his hard work. He always put into the school and was always striving to be better.

Mr. Vanderwall said he impacted him personally because they played basketball together at Hope College, and the fact that Mr. Vanderslice was always pushing you to become the best person you could be.

As Mr. Philo said, “I’ll keep talking about that guy for the rest of my life; he arguably is my best friend.”

3 thoughts on “Mr.Vanderslice: A Tribute”